Everybody knows that it is important to eat plenty of vegetables. On the other hand it turns out that less than 10% of Europeans are eating the recommended daily amount of fruits & vegetables. One of the reasons we need to eat enough vegetables is to make sure we get enough chlorofyll. Chlorophyll is the green pigment found in all plants. It is the powerhouse of the plant, responsible for energy production. In our body, chlorofyll works as a powerful anti-oxidant.

Naturally, you can find chlorophyll in all green leafy vegetables. However, chlorophyll is easily destroyed during cooking. So, to derive maximum benefits it is better to eat it raw. This can be in the form of vegetable juice,salads or green algae superfoods!

Micro-algae Spirulina, Chlorella and Marine Phytoplankton contain more chlorophyll than any other food source. These superfoods are thus making it very easy to get your daily dose of “vegetables”

The advantages of chlorophyll

Chlorophyll or chlorophyll is a good source of antioxidants . Anti -oxidant food substances such as vitamins A , C and E help to neutralize harmul molecules (free radicals) thatmay cause to damage to healthy cells

Chlorophyll and chlorophyllin are able to bind with chemicals that are known carcinogens, including polycyclic aromatic hydrocarbons which are found in tobacco smoke. Chlorophyll is known to neutralize polluted air when inhaled, making it an absolute plus for smokers or people who live in the city .

But there is more. According to the U.S. NIH (National Institute of Health) chlorophyll also has anti-carcinogenic properties . Chlorophyllin ( CHL ), a water-soluble derivative of chlorophyll , ‘ exhibits strong anti – mutagenic activity against a variety of carcinogens . ” In a study from 2007 140 trout were induced with liver and stomach cancer. They were fed with HL (2000 ppm), which protected them from liver and stomach cancer.

Another major advantage of chlorophyll are it’s properties as chelating agent. Chlorophyll binds with toxic heavy metals in the body and it will be removed safely.For example, mercury is a toxic metal that chlorophyll can remove well.  Chlorophyll is a great option for those with mercury fillings in their teeth or those who they just have it removed . Often is much mercury is released in the body in this procedure. 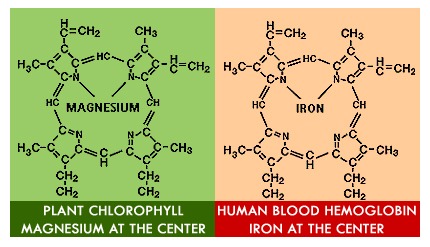 Scientists have studied the assimilation of chlorophyll in the body and  found that at a certain point the magnesium changes in iron. It is still not known how this process works or how this change is made. .

Nevertheless, the intake of chlorophyll could be regarded as a “green” blood transfusion. The best way to get chlorophyll in the diet is through a chlorophyll supplement like marine phytoplankton or spirulina and chlorella. They can be easily taken in powdered form in smoothies or as tablets.

“There are two kinds of cardiologists: vegans and those who haven’t read the data.”

Some people think a plant-based diet, whole foods diet is extreme. Half a million people a year will have their chests opened up and a vein taken from their leg and sewn onto their coronary artery. Some people would call that extreme.

“You will find that your taste buds have a memory of about 3 weeks.”

― Neal D. Barnard, Dr. Neal Barnard’s Program for Reversing Diabetes: The Scientifically Proven System for Reversing Diabetes Without Drugs
After doing my research I feel comfortable taking this. All natural, easy to swallow, no after-taste with no noticable side effects . I take 3 capsules  twice a day and I like the results. Gives me that added boost of energy I need to keep moving. Seva Ananda Koch
